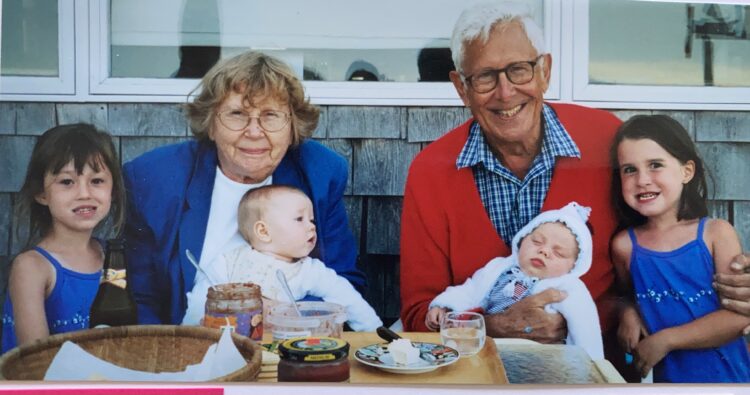 Gwinn didn’t have a Greek bone in his body, but he was a full-blooded Hellenophile. His passion for all things Greek dated to a magical journey he made as a young man.  While there, he became enchanted with the history, the culture, and the Aegean, but most of all the people and their unparalleled zest for life.  Once he retired, he and my mother-in-law, Joan, would make an annual 2-week voyage there, and stay with friends he had made almost a half-century earlier.

Back home in Baltimore, aspects of Greek culture would pervade the remaining 50 weeks a year. Grecian artifacts decorated their house. Each evening before dinner, my in-laws would raise a martini glass to one another and toast “stinygiasou!” (“to your health”). A Greek salad followed the main course every single night at dinner. Gwinn was tapped for a commission whose mission was to return the Elgin marbles (properly called the Parthenon marbles, he would want you to know) from the British Museum to Athens. They even named their cat “Melina” after the famous Greek actress-cum-politician Melina Mercouri.

So when their first grandchildren came along in 1991, there was no question what Gwinn and Joan would be called–“Pappou” and “Yiayia” would ultimately become doting grandparents of six.

I particularly miss Gwinn this time of year, because it was in August when the entire Owens clan would gather for vacation in Little Compton, Rhode Island, a place Gwinn loved dearly.  From the front porch overlooking the Atlantic, every evening we’d raise a toast to one another, and laugh and visit before retiring inside for a leisurely dinner, often seafood.

I’m grateful to Gwinn for sharing with me his love of New England and passion for Greece, where I hope his son and I might visit someday, perhaps for our 30th anniversary next year.

Most of all, I’m grateful to him for being an adoring father-in-law.  Never once in the decades our lifespans overlapped did I whiff the faintest hint of judgment or disapproval that taints so many in-law relationships.  Just the opposite—he’d often turn to Paul and tease, “How did you get her?”

I never had the chance to serve Pappou my Greek Snapper, but he would’ve loved it.  “The best fish I’ve ever eaten,” I like to think he’d proclaim.  He was fond of superlatives.

Stinygiasou, Pappou! This recipe is for you.

Delicious prep for any flaky white fish; serve atop orzo pasta to soak up the yummy sauce.