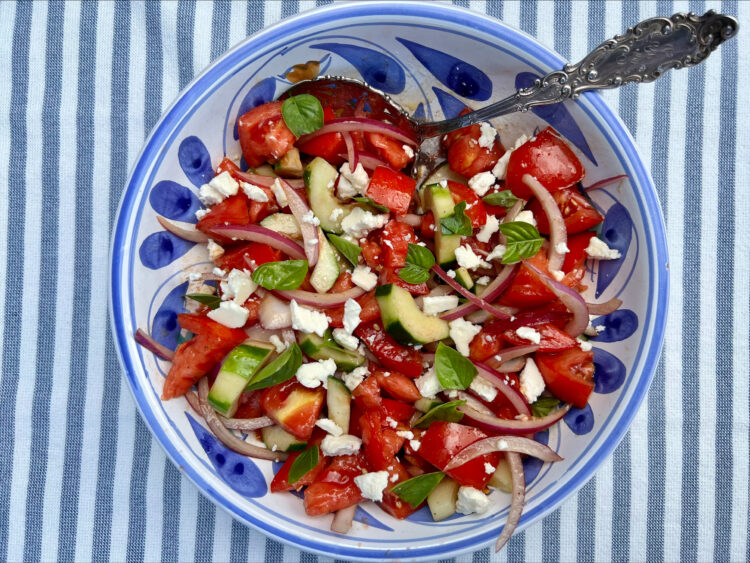 I have a confession to make: I am not really allergic to cucumbers. It was all a lie to get to the peanut butter candy.

Weirdly, when I was growing up in the 1970s, one of the best places to have lunch in Orlando was the cafeteria at Audubon Park Elementary School, which I attended.

No lie—it was so good that some kids’ moms would actually come by at lunchtime and plunk down their 65 cents to have a hot lunch with little Sally and Dick Jr.

The food was cooked from scratch by real lunchroom ladies. Turkey, stuffing, mashed potatoes and gravy. Shepherd’s pie and green beans with bacon.  Spaghetti and meat sauce.  And massive Parker House rolls, baked on giant sheet pans and glistening with butter, each one as big as a softball.  Lawd have mercy.  No one was counting carbs.

Fellow Audubon Falcons, can I get an Amen?

An interesting side note was that the best place in town to have lunch was swallowed up by a sinkhole in the middle of the night, when I was in 3rd grade. Not making this up.  See the 1975 photo here.  It took ‘em a year to rebuild, and we got bussed to Fern Creek, which we called Fern Freak. They called us Odorbomb.  All’s fair in love and playground taunts.

Interesting, but beside the point of this particular blog post.

Which is this: the single item at the Audubon cafeteria that I could not stomach was the cucumber salad:  basically raw cucumbers, tomato wedges, and sliced onion, tossed with oil and vinegar.

Typically I would simply scrape the stuff into the trash, at the end of lunch, until I hit the sixth grade, and was assigned Miss Jewel May Lewter as my classroom teacher. Some day I will write an entire post, if not a book, about this formidable battle axe of a woman.  But today, suffice it to say that Jewell May believed in the good book, Elvis Aaron Presley, and the Clean Plate Club.

No one in Miss Lewter’s class was allowed to consume dessert until they had polished off every other item on their lunch tray.  Yes, even cucumber salad.

This wasn’t an issue for me if the daily dessert was a piece of fruit or even an oatmeal raisin cookie. But occasionally the stars would align cruelly and cucumber salad and peanut butter candy would appear together in the same square on the posted weekly menu.  A true dilemma.

Well, friends, I came up with a pretty elegant solution.  I simply told the ladies as I entered the lunch line that I was allergic to cucumbers, and would be given a tray free of the noxious stuff.  Thus, when it came time for Jewell May’s dessert clearance, she’d find nary a trace of the stuff on my tray.  I would snarf down my peanut butter candy with a clear conscience.  Eventually the cafeteria ladies even remembered my fake allergy.  “She’s allergic to cucumbers!” the first one would announce as I would round the corner and hand over my tray.

Flash forward about 40 years.  As with most people, my palate has expanded along with my waistline, and I have learned to eat all kinds of things that once would’ve induced the gag reflex: bleu cheese, clams, and even cucumbers.

About 10 years back, we were invited to a potluck picnic, and I was assigned to bring a salad side dish. It being fresh tomato season, I decided to toss together a nice, piquant side dish using the bounty from the farmer’s market:  some tomatoes, lovely cucumbers peeled in a stripy, jaunty fashion; red onions and fresh basil, all tossed together with some balsamic, olive oil, salt and pepper. Kind of a deconstructed gazpacho, celebrating the peak of summer.

As I looked down on my creation and admired the explosion of colors, then crunched on a few mouthfuls to correct for seasoning, it occurred to me.  Could it be that I had just recreated the very despised salad of my youth? Indeed, I had.

And I hope you will, too, as this summer salad is everything good:  easy, flexible (the version below adds fresh basil and feta, but would be great with fresh mozzarella and oregano as well) and transports well to picnics. There’s no lettuce, so it doesn’t get soggy, and keeps well in the fridge.  If there’s juice left at the bottom of the bowl, soak it up with crusty bread.

And, if happen to be an Audubon Falcon who’s feeling nostalgic, finish your meal with a gigantic square of peanut butter candy.

The perfect summer picnic salad and barbecue go-with. You will not make up a fake allergy to avoid eating this.